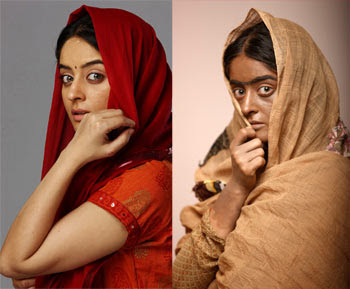 This serial is based on a poor girl “Nakusha” who is most beautiful but due to poorness her mother did not want that her beauty became cause of problem for her family. So she makeup Nakusha as an ugly girl. But one day the mystery of Nakusha’s ugliness has disclosed and it shows that she is a beautiful girl. But one police inspector keeps bad views on Nakusha. And he want to be marry with Nakusha by force. But an mafia don Bhaiji saved the Nakusha from that inspector.
Nakush falls in love with mafia don Bhaiji, even Bhaiji is widower. Bhaiji sisters do not want that love story of Bhaiji and Nakush should grow, because they want property of Bhaiji.

The concept of this serial has been taken Hindi film “Wanted (2009) ” in which a police inspector (played by Mahesh Manjrekar) wants to be marry with pretty Aisha Takia. This concept of this serial matches with real story of Sanjay Dutt and her sisters Priya Dutt and one more. As you know that Sanjay Dutt was widower and he married with Manyata against the wishes of his sisters. Priya Dutt and one more do not want that Sanjay should marry in this age.
But hero Sanju Baba did not followed the wishes of his sisters. And he married with Manyata.

A brief biography of Pavan Malhotra– Pavan Malhotra is very talented and senior actor. He has played many roles in many Bollywood Hindi films like – Salim Langde Pe Mat Ro, Pardes, Delhi 6, Hydrabad Blues and many more. He has several TV serials also. He has completed 20 years in Bollywood and television.

A brief biography of Mahi Vij- Mahi Vij has started her career as a model for print media in New Delhi. Later she comes to Mumbai for sharp her career in film industries. She has started her career in Mumbai as a fashion model. After some struggle she has got some video music album. She has got two south Indian film as supporting actress. In between she has gotten her first break in television serial as mean lead actress in “Kaisi Laagi Lagan“, which eventually became “Shubh Kadam” on Sahara One channel. It ran for a year. After this serial Mahi Vij has gotten biggest chance in television world and she has been selected for cast for Nakusha in “Laagi Tujhse Lagan” . She became famous over night by this serial.

You can watch latest episode of this serial on websites.