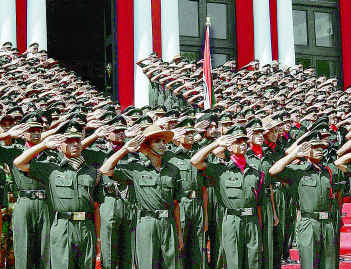 The process of join Indian Army is difference for each parts. The eligibility and age bar for applying candidate are differences for each departments. So that job natures and condition are also differences in each part of Indian Army.

For a general duty army in Indian Army the retirement age is 16 years of job. If a GD army found fit for promotion to Havildar posts then his age of retirement will be increased.

Indian Army job is most powerful and respected job in India. Army get many facilities during their services and after retirement. Leave scheme in Indian Army is attractive. Any person of Indian Army can take leave of more then 40 days any time in one year.

Every Indian have pride on our India Army.