List Of DTC Bus Number, Route And Stoppage Of Delhi 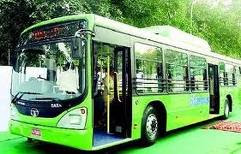 New Delhi is not a metro city only but also a state. There are seven districts in New Delhi. The public transport system of New Delhi is based on Delhi Transport Corporation (DTC) buses, blue line buses and metro trains. Government bus service is maintained by DTC and private bus service is called “Blue Line Buses”.

There are many buses by which you can go any where above. The AC buses takes more fare than Non AC buses. All buses are eco friendly because all buses in New Delhi are CNG buses.